Thanks! Your feedback has been sent.

MENTAL HEALTH IN THE SHADOW OF THE COVID19 PANDEMIC

Identity Renegotiation (IR) is unique among approaches to mental health because it emphasizes the ways in which individual experiences and relational processes are influenced by the environment.

In 2020 people around the world are in the grip of grief and loss caused by current health/illness/morbidity and other tragedies. Daily life is dominated by the challenges of trying to protect against infection--including life in quarantine and the closing of public accommodations that have been important in daily life. At the same time video technology has increased awareness of systemic racism, showing horrible scenes of police violence directed towards minority groups. And the effects of global warming are creating anxiety about fires, tornadoes, and drought. Throughout the world, people are facing unique circumstances that threaten relationships as well as personal ability to manage feelings and behavior.

In these times the IR message is that everyone is capable of change and change can be coordinated with our families, loved ones, employers, and others. With awareness of social forces, people can replace and/or modify identities that threaten their well-being.

These times are also calling for changes in the delivery of mental health services. Social distancing needs have led to many therapeutic services moving from f2f to virtual contact. I have been a leader in this movement, using distance technologies for 20 years. I am comfortable with the process of creating meaningful relationships in a variety of formats including video, phone, and email.

A Helping Approach for the 21st Century

It is now over 100 years since professional counseling and psychotherapy were created. They were considered “modern” at the time, but so was indoor plumbing. What were the conditions of people's lives that time?

But in the last few decades, a period that has been labeled as “postmodern,” conditions have changed:

At the same time, the Euro-Western ideal of the separate “self,” dating back to classical Greece, has been challenged. People are reconnecting with an ancient image of a Relational Self--a person whose life is intertwined with others, who is responsible not only for self but for the social group. This fits with contemporary experiences of global interdependence.

The goals of Identity Renegotiation Counseling are flexible and can be applied to the unique needs of particular individuals, groups, couples and families.

Whether clients seek help one at a time or together, counseling is available in traditional face-to-face settings and through online connections. These online contacts are often text-based (chat, text message, and e-mail) because language is very powerful, but voice and video technologies are extremely helpful with strained relationships. Readings and homework exercises can provide support for clients as they begin to change their ways of thinking and acting. Progress is generally rapid as both historical accounts and present realities are changed. 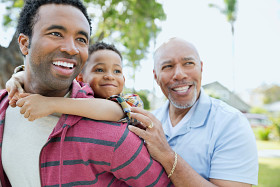